From pioneering the manufacturing and distribution of the first animal-source insulin in 1923 to launching the first biosynthetic form of human insulin, Lilly has been working for over 95 years to develop medicines that save and improve the lives of people with diabetes.

Lilly continues to research, develop and manufacture innovative insulin products and technologies to improve adherence, outcomes and convenience for people living with diabetes.

While the current health care system largely ensures affordable access to insulin for people with diabetes, we recognize the health care system does not work for every person. Some people either have no insurance or growing deductibles in high-deductible health plans (HDHPs). These people may incur relatively higher out-of-pocket costs for their medicines. For example, if a person has an HDHP – particularly one where the insurer does not exempt preventive medicines from the deductible – that person may have to pay most of or the entire retail price for the treatment at the pharmacy before their deductible is met and their insurance begins to pay for the health care.

How we price our medicines is not a decision we take lightly, or without considering how it will impact patients’ ability to access medicines. Read on to learn more about the U.S. health care system and what Lilly is doing to address access and affordability for our insulins.

Insulin: More Than 90 Years of Innovation

None of our active insulin ingredients are covered by an active patent, and we are not using patents to keep new entrants out of the insulin market. The patent on Lilly’s most commonly used insulin, Humalog U-100, expired in 2014.

The University of Toronto paid the discoverers of insulin, not Lilly, $1 for the original patent in 1923. Lilly then paid the University a 5% royalty for every vial of animal-source insulin sold until 1967.

Insulin was discovered nearly 100 years ago, but it’s not the same insulin being made and used today. While Lilly began large-scale production of animal-source insulin in 1923, many advancements have been made since then to bring significant improvements to the way diabetes is treated.

Insulin was a new invention then, but production was crude. To produce a vial of insulin, pancreases from livestock were ground up to extract the life-saving substance — leading to purity and quality concerns.

That’s good, but still a decade less than the average. So Lilly scientists are developing non-insulin drugs and therapies that, if successful, could put diabetes in remission or even cure it for some. At Lilly, we’re not just treating diabetes, we’re trying to stop it.

1982: The first biosynthetic human insulin – similar to the natural insulin made by the body – was a significant advance in the treatment of diabetes and ended concerns about whether there would be enough animal insulin to treat the growing epidemic. 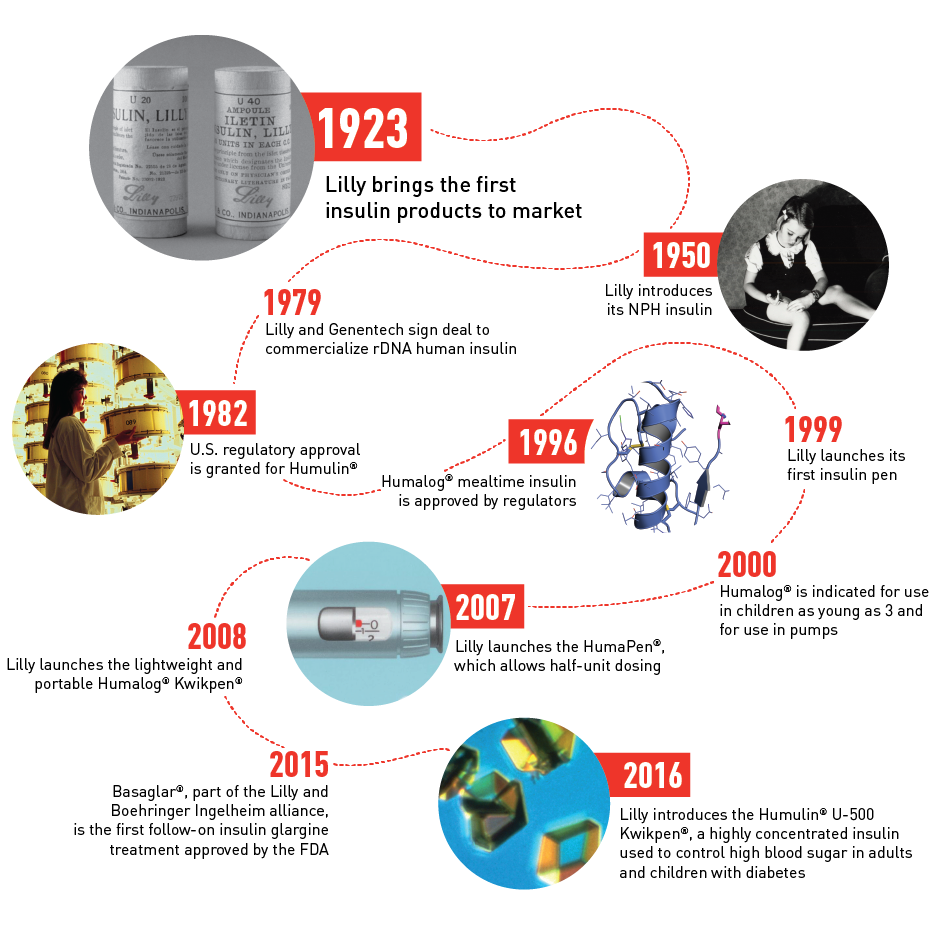 Download the above infographic: History of Lilly Insulin Timeline

It takes several months, from start to finish, to create the insulin that people use today.


If you have questions on how much you might pay for your Lilly insulin, please visit lillypricinginfo.com.

Lilly offers automatic savings directly to people with commercial insurance by limiting their out-of-pocket cost. When a person with commercial insurance, even if they have a high deductible, fills a prescription for a Lilly insulin at a retail pharmacy, the individual generally will pay about $95 for a month's supply, subject to local and state regulations and quantity limits.** The discount is automatically applied at the point-of-sale without any proactive action on the part of the insured, and therefore has an immediate impact on out-of-pocket costs. This program is available to people without insurance when they contact the Lilly Diabetes Solution Center.

** Lilly offers savings programs designed to limit out-of-pocket costs for Lilly insulins. The vast majority of commercially insured and uninsured patients can expect the out-of-pocket cost for their prescription to be $95 or less at the retail pharmacy. Pharmacy and uninsured patients must participate; government beneficiaries are excluded, and some limitations apply.
*** Terms, conditions, and limitations apply to the co-pay cards. Not available to those patients with government insurance such as Medicaid, Medicare, Medicare Part D, TRICARE®/CHAMPUS, Medigap, DoD, or any State Patient or Pharmaceutical Assistance Program.

Patients' specific out-of-pocket costs vary significantly depending on numerous factors, most notably the type and terms of their insurance coverage. Changes in the U.S. health care system have led to greater consumer cost-sharing and a growing number of patients exposed to a medicine’s full retail price. While the current health care system works for many, this has left some Americans struggling to pay for their medicine.

Lilly offers a suite of affordability programs for people in the U.S. struggling to afford their Lilly insulin prescription.

This includes the Lilly Diabetes Solution Center, a patient-focused hotline staffed by medical professionals, that connects people living with diabetes to various solutions based on their individual circumstances. In 2019, Lilly’s programs helped up to 20,000 people a month.

If you need help paying for your insulin, contact the Lilly Diabetes Solution Center at (833) 808-1234

Get Help Paying For Your Insulin